Relevance. Despite the seeming simplicity of kettlebell exercises, such as snatch, jerk, long cycle double kettlebell clean and jerk, on the outside they are of a rather complex structure. Due to the dynamics of movements, when performing kettlebell exercises, a high degree of space-time coordination of tension and relaxation processes is needed in active muscles when breathing. Motor kinematics is strictly subject to the law of universal gravitation (R.M. Baymukhametov, 2011). There is probably no need to bother about the complexity of the exercise to lift kettlebells 20-30 times or so. However, as of regular exercises, one should avoid overloading joints and spine, as well as take care about the effectiveness and efficiency of the exercise technique, since, unfortunately, the rate of injuries among weightlifters, particularly beginners, is still high.

There are multiple examples of weightlifters being subject to extreme loads during their training. Thus, an athlete weighing 64 kg, who is performing double kettlebell clean and jerk with 32 kg bells, is already under 200% support pressure when in preparatory position. However, the strongest weightlifters of Russia, even lightweight ones, are able to lift two 32 kg kettlebells over 100 times per 10 minutes of competition.

Today, scientific works, articles and studies on prevention of injuries among weightlifters are seldom mentioned in press. As noted by A.I. Vorotyntsev (2002), V.F. Tikhonov (2009), sport science is still much obliged to thousands of fans of kettlebell sport. They express their regret that the recreational effect of kettlebell exercises on the body of people of different age is poorly studied. That is why any experiments on one’s own health are not always reasonable: some weightlifters improve their health and make certain of the benefit of these exercises, while others, due to haste or lack of technique of holding kettlebells, suffer injuries and thus find confirmation of the opposite.

The problem of injuries is acute in all sports, especially in the teen and youth age. Young people, trying to achieve high results as soon as possible, do not make enough efforts to study and improve the technique of movements, neglect the principles of gradual increase of loads, optimization of the ratio of volume and intensity of load. Some young athletes overuse pharmacological means, both for stimulation of muscular activity, and for fast restoration of the body. Such a way can really lead to considerable results within a short period of time. However, the musculoskeletal system not always manages to get ready for increased requirements for achievement of big goals within a short period of time.

The purpose of the study was to detect the reasons of injuries in kettlebell sport and how to eliminate them.

Results and discussion. Our research of characteristics of motor actions of more than hundred weightlifters of various ranks, having been conducted for several years, since 2010, promoted allocation of a number of efficiency criteria of the technique of kettlebell exercises and the factors of increase of efficiency of weightlifters’ motor actions. Being unable to describe all of them in our paper, we will refer only to those ones which concern the preparatory position before the next clean and jerk.

The correct preparatory position is one of the key pre-conditions for effective performance of the succeeding movements (L.P. Matveev, 1991). The starting position, as A.A. Ukhtomsky put it, might be termed as a state of ”operative rest” in which, though without any external movements, goal-oriented readiness for action is fully materialized.

A particular variant of the preparatory position before the next clean and jerk is mainly determined by the weightlifter’s morphofunctional characteristics, as well as by his abilities to rationally compensate the effect of the kettlebell, body and head gravitational forces. If the preparatory position is rational, the spine is unloaded as the kettlebell gravitational force is projected through the elbow joints right on the pelvic bones. An athlete gets a kind of rest interval (V.N. Gomonov, 2000).

For descriptive reasons let us illustrate the effect of the kettlebell gravitational force and the resultant gravitational force of the head and body in the variation typical for beginner weightlifters (Fig. 1) and for elite athletes (Fig. 2) in the preparatory position before the next clean and jerk. 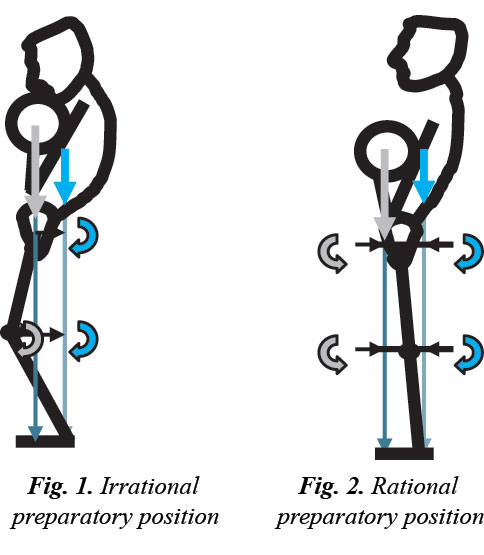 Holding the kettlebell handles with thumb pads, as well as elbows fixed on the iliac crests with legs straightened and arm muscles maximally relaxed reduce overexposure of the gravitational forces and the moments of these forces in joints and make motor actions more efficient.

As a rule, weightlifters, who do not pay due regard to development of joint flexibility and necessary mobility, do not achieve any prominent results. Excess tension in the quadriceps of a thigh and body flexors, airflow obstruction in case of the irrational preparatory position before the next clean and jerk limit weightlifters’ capabilities, which is theoretically justified. There are cases in sport science when the maximum physical effect is achieved only if the levels of muscular tension are optimum (i.e. when neither of the muscles reaches its maximum). This can be explained by the fact that the levels of their activity are interrelated and interdependent. That is why excessive increase in the level of activity of any of the muscles leads to the decrease in the activity of the rest of them and to the loss of the common effect of motor actions.

1. The injuries in kettlebell sport are caused mainly by performance of kettlebell exercises mostly using force. Thus, exercises are performed in the conditions of excess tension in the knee joints and the lumbar spine.

2. Various spine overstrains, injuries of knee joints, strains and muscle sprains at all stages of training should be prevented using the rational compensation of gravity actions and the optimum alternation of the processes of tension and relaxation of muscular groups involved in motor actions when doing kettlebell exercises.

3. The problem of prevention of injuries in kettlebell sport can be settled in case of initially properly mastered technique of performance of competitive exercises.

Posted by admin in Träningstips