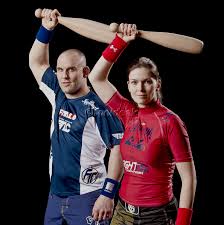 The appeal of the Spartan Wooden Clubs lies in their pure simplicity and the beautiful and unique natural grain and contrasts of the wood. We use only well stored and dried high-quality beech wood for the production.
Nevertheless, fine cracks may appear on the surface after the production due to fluctuation of temperature or humidity. Those cracks, however, are mostly only temporary and vanish when the temperature or humidity changes again.

The club is probably humanity’s oldest military equipment and training device.
The ancient and legendary heroes preferred to pose with powerful clubs that consisted naturally of wood.
In the Persian and Indian regions, the practice with clubs is pursued since Alexander the Great and it is matched by the development of wrestling in these latitudes.
Even in the middle of the 19th century (Karl Gotch et al.), clubs were, among wrestlers, an insider’s tip for sports-related power practice.
Club practice means handling light clubs weighing only a few hundred grams up to very heavy clubs weighing 17 kg or more.
The practice with clubs is pursued in cyclic swings and movements that range from alternating and concurrent repetitions up to entire movement combinations similar to a freestyle or flow exercise.
The use of clubs increases coordination, grip force, body tension and the strength of the interlinked muscles of the entire pectoral girdle and neck area.
Such a practice is very functional and optimally suited for the specific additional training of body-conscious combat sports (such as wrestling, judo, grappling, MMA etc.).

There are no reviews yet, would you like to submit yours?

Be the first to review “Indian wooden club” Avbryt svar